Qatar Award Flights Can Now Be Booked With Alaska Miles 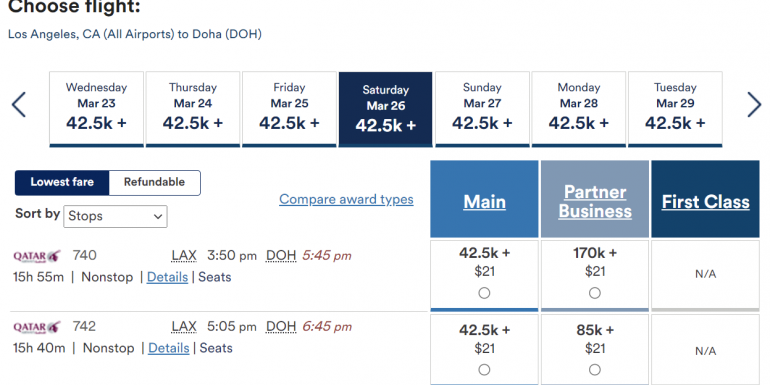 Heads up, Alaska Airlines flyers. As of Thursday, you can now use your Mileage Plan miles to fly one of the best business class products in the world: Qatar Qsuite.

Ever since Alaska joined the Oneworld alliance on March 31, 2021, points and miles nerds have been anticipating this moment. After all, the Alaska award chart is full of sweet spots. So, we were hopeful that Mileage Plan awards on Qatar Airways would be just as sweet.

However, award rates aren’t as low as we hoped they might be. Plus, there’s a twist to this partnership that’s leading to eye-popping award rates. So, let’s dig into what you need to know about this new mileage partnership between Alaska and Qatar.

Alaska Mileage Plan members can now redeem miles for Qatar award flights between the U.S. and the Middle East, the Indian subcontinent and Africa.

For most of its partners, Alaska Mileage Plan lists just one award rate between any two regions. However, that’s not the case for Qatar awards to or from the U.S. Instead, Alaska lists award rates “starting at” a particular price. Qatar doesn’t operate first class flights out of the U.S., but for economy and business class, the lowest-cost award rates range start at 42,500 miles.

As an added bonus, you can connect onward from Doha to the rest of the Middle East or the Indian subcontinent for effectively the same rates.

That includes award flights from the U.S. to the Maldives for as few as 42,500 miles in economy or 85,000 miles in Qatar Qsuite business class:

You can really stretch this award by flying economy from Seattle to Cape Town, South Africa, for 50,000 Mileage Plus miles.

At least for now, Alaska isn’t allowing Qatar awards from the U.S. to Asia, Europe, Australia, New Zealand, the South Pacific or any other Mileage Plan region.

Why do some Qatar award flights have such high rates?

Unfortunately, you aren’t going to find such low award rates on all Qatar award flights. For some, like a business class flight from Seattle to Cape Town, Alaska is charging up to 280,000 Mileage Plan miles one-way.

Based on our initial searches, it seems that Alaska’s partnership with Qatar allows Mileage Plan members to book award space at both the low-priced saver level and for additional award space not found on other partner airlines — albeit at higher redemption rates.

For instance, in the example above, you can fly from Seattle to Cape Town in Qatar business class for 280,000 Mileage Plan miles on June 5, 2022. However, you can’t use American AAdvantage miles (another Qatar partner) to book that same ticket as an award flight.

So, although it’s concerning to see sky-high award rates, these redemptions seem to be limited to award flights that can’t be booked through other partners. In other words: They’re exclusive to Alaska.

Mileage Plan awards on Qatar outside of the U.S.

Unfortunately, none of these award rates provide particularly good value or new sweet spots. For example, award flights within the Middle East cost:

That’s a very steep rate for short award flights, especially considering some can be just an hour and a half long. Comparatively, American Airlines charges half as many miles for Qatar first class on these routes.

How to get Alaska Mileage Plan miles

Besides flying on Alaska and its partners, Mileage Plan miles aren’t the easiest miles to accumulate. Unlike other major U.S. mileage programs, Alaska Mileage Plan isn’t a transfer partner of any bank program. The only major transferable currency that transfers to Mileage Plan is Marriott Bonvoy.

Thursday’s news is great for those with Mileage Plan miles; however, there are still better ways to book Qatar award flights.

For example, instead of paying minimum 85,000 Mileage Plan miles one-way to fly Qatar business class from the U.S. to the Maldives, you can redeem 70,000 AAdvantage miles for the same flight:

Similarly, you can use Qatar’s own mileage program, Privilege Club, to fly between the U.S. and Doha for just 70,000 Qmiles.

Having access to Mileage Plan awards on Qatar Airways was one of the most exciting parts about Alaska joining the Oneworld alliance earlier this year. However, now that these awards are live, we can’t help but be a little disappointed by the above-average awards rates.

It’s generally concerning to see much higher award rates on some flights. For members who are used to excellent value up and down the Alaska award chart, it’s striking to see 100,000 one-way awards in economy and 280,000 business class awards.

However, if these are truly awards that can’t be booked through other partners, this could present a unique opportunity for Mileage Plan members to book Qatar award flights.