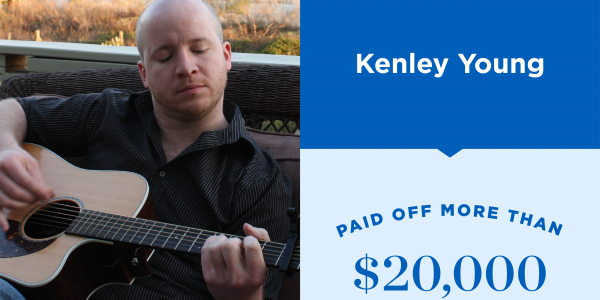 In this series, NerdWallet highlights people’s debt payoff journeys. This month, Kenley Young recounts how he combined lots of tools for cutting debt, with knowledge he gained working at NerdWallet, to wipe out his credit card balances.

In the first week of 2022, I checked off a long-running New Year’s resolution: I paid off the more than $20,000 in credit card debt I’d owed for about two decades.

It was far from an overnight success. I didn’t really start attacking my debt in a deliberate way until the summer of 2016. Five-plus years later, by the time I zeroed out my balances across those two credit cards, it felt like I’d exhausted every trick in the book.

Even acknowledging my struggles with debt makes me self-conscious: I work at NerdWallet, so shouldn’t I have been able to avoid this?

Well, I know more now than I did five years ago, including just how difficult it can be to avoid credit card debt as major life events unfold.

Here’s how I racked up my debt, how I attacked it — and the tools that made the most difference.

How I accrued my debt

My debt journey started in the early aughts with an $1,800 Martin guitar I couldn’t afford. Once I justified that purchase on a meager newspaper salary, it was no sweat to rationalize travel, furniture, rounds of drinks, whatever.

But guitars and Guinness are one thing (well, two things, technically). Then, came the house. The engagement ring. The honeymoon. The vet bills for a very sick dog. The cross-country move to Los Angeles for a new job. The LA rent. The two children. The day care invoices.

I had no emergency fund — or any savings to speak of — so I leaned on credit cards. I was drowning in debt in an expensive city.

Ready to conquer your debt?

Track your balances and spending in one place to see your way out of debt.

How I dug out

Maybe it was the afternoon I found myself driving the streets of West LA, scanning gutters for aluminum cans to turn in for pennies. But at some point, it dawned on me that extreme frugality alone wasn’t enough. The steps I took from there included:

1. Moving to a cheaper state

In the summer of 2016, my family and I moved from Los Angeles — one of the most expensive cities in the world — to Columbia, South Carolina, a city routinely recognized as one of the most affordable in the country.

Before I get too far with this tip, I need to acknowledge my privilege and the fact that simply packing up and leaving town is not a possibility for everyone. Uprooting yourself can be painful and prohibitively expensive. We not only lost my wife’s $40,000 salary when we left town, but the move itself cost thousands of dollars. We paid for it by liquidating a life insurance policy that my wife’s late grandfather had put in her name.

Long term, though, it made sense. I’d gotten a new, higher-paying job that allowed me to work remotely. And despite the temporary net loss in household income, we had a soft place to land.

My wife and I are from South Carolina, and our families are here. We had a village to help us get on our feet. For the first eight months, in fact, we lived rent-free with my gracious and accommodating in-laws. That’s a safety net that not everyone has.

Now that we have our own place in Charleston, we’re paying a mortgage. It just happens to be $1,000 cheaper per month than our LA rent. Those savings on housing costs were what made the biggest difference, even as our household income had initially shrunk to $95,000.

Counterintuitively, the second-most-important weapon in my credit card debt-zapping arsenal was … another credit card.

But this one had a superpower: a 0% introductory APR on balance transfers for 21 months. I moved a large sum to it from an existing card with a double-digit APR, so as I chipped away at that balance for nearly two years, none of my payment was wasted on interest. It was a step I used repeatedly with similar card offers.

3. Taking on side gigs

In another life, I was a singer and guitarist in a rock band. We broke up long ago, but I held on to live music as a hobby. I also held on to much of the gear I now use for side gigs.

My typical solo acoustic gig pays $150 to $200, and on a good night, tips can add an extra $75 or so to my haul. I’ve also set up a digital tip jar, so patrons who don’t carry cash can slide me a five-spot through Venmo.

In a good month, I’ll book two to four gigs. So, conservatively, that’s at least an extra $300 per month that I once put toward my debt and now drop into a high-yield online savings account.

(Turns out that guitar wasn’t such a bad investment after all.)

Tax refunds, Christmas gifts, escrow overages. You name it — I threw it at my debt.

Of course, as a parent and a homeowner, these windfalls have all kinds of tempting uses, so prioritization is key. I had a lot of wants, but the biggest was getting out of debt.

We bought our home in 2017, and I’ve since refinanced our mortgage twice and paid off a car loan. That saved us a chunk each month.

But smaller cuts helped, too. We ditched cable, found cheaper home and auto insurance, got a better deal on our cell phones, unsubscribed from monthly services like newspaper delivery, Sling TV and more.

Yes, credit cards got me into this jam. But my new job taught me a lot about them, and I knew that using cards strategically would reap benefits.

My credit was good enough to qualify for a rewards credit card, which I used for necessary purchases like groceries and gas. I paid off whatever I put on that new card immediately, so it didn’t add to my debt, then used the rewards to help pay down what I still owed.

When I learned about “double-dipping” — using a rewards credit card on a cash-back website to earn both the card’s and the site’s rewards — I was hooked.

My most frequented sites when I shop online are TopCashback and Rakuten, but I always check the Cashback Monitor aggregation site to make sure I’m getting the highest rates.

I also joined a website called MyPoints, which lets you take surveys or snap photos of receipts for points that you can redeem for money. I now save receipts religiously and submit them to a variety of cash-back apps: Ibotta, Fetch and Upside, to name a few.

In addition, I used an app called Qoins, which lets you round up purchases to the nearest dollar and put the difference into an account. At the end of the month, Qoins mails that balance — minus a fee — to your creditors.

A tried-and-true way to make quick cash? Sell some stuff on Craigslist. I focused on popular and high-margin items, mostly electronics and musical equipment, but also kids’ toys and bikes. Some kid out there now has a decent hand-me-down guitar she can smash to bits on stage one day.

And it wasn’t just merch I unloaded. Many holiday seasons I received a gift card to a store I rarely frequented. It’s the thought that counts, of course, but on many occasions, my main thought was, “If only I could liquidate this thing.”

Good news: Many online exchanges let you sell unwanted gift cards for cash. The bad news is you won’t get face value. A $100 gift card sold through CardCash might net you $80. But if you were never gonna visit that Ponderosa Steakhouse anyway? Might as well take the money and run — or put it toward debt.

After eliminating credit card debt, I can focus resources elsewhere. My wife and I have started a monthly budget and track our spending. We’re setting goals for travel, home improvement, investing and saving.

Our discussions aren’t always easy. Talking about money — especially debt — rarely is. But I found that confronting my debt and being honest with myself about it made the process easier.