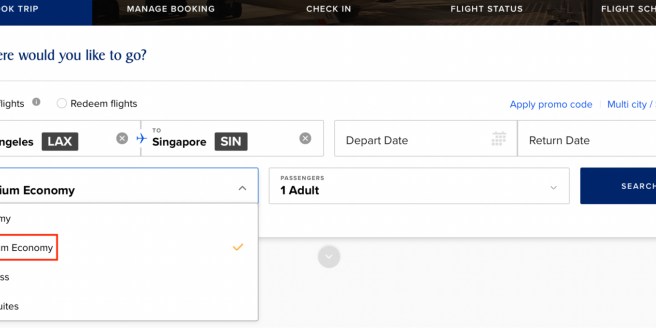 What to expect flying premium economy with Singapore Airlines

Premium economy ticket holders get a host of benefits that aren’t available to economy flyers.

How to book a premium economy ticket with Singapore Airlines

Whether using cash or redeeming KrisFlyer miles for a ticket, go to the Singapore Airlines website and search for a flight. When selecting your cabin class, choose “Premium economy” from the drop-down list:

When redeeming miles, you’ll need to log in to your Singapore Airlines account to search for a flight.

Ways to get good value

Singapore doesn’t generally release award space for its premium economy class to partners. This means that if you’re looking to redeem miles, you’ll want to do so directly with Singapore rather than one of its Star Alliance (or other) partners.

To find availability for these tickets, use the search bar on Singapore’s site to look for space. Make sure “Redeem miles” is toggled on at the top of the search bar.

Singapore operates a distance-based award chart, which means you’ll be charged a higher amount of miles if you’re flying from the East Coast or Houston.

For instance, the world’s longest flight — between New York-JFK and Changi Airport — costs 73,000 miles in premium economy. Compare this with the 68,000 miles you’ll pay when flying from Los Angeles.

Although it’s incrementally more expensive to book a flight from the East Coast, it actually makes sense to join in on the nonstop rather than take a positioning flight to the West Coast. Most airlines charge more than 5,000 miles for a transcontinental ticket, and you’ll be adding more than three hours of flying to your trip by choosing the West Coast option.

It’s too bad that Singapore Airlines doesn’t offer these flights to its partners, but that doesn’t mean it’s difficult to earn enough points to redeem. This is because of the strong partnership Singapore has with transferable point currencies:

With all of these transfer partners, it’s easy to earn enough points for a premium economy ticket. Combining welcome offers from multiple card issuers can even score you seats in the airline’s famous Singapore Suites.

These cards have large welcome offers to help you earn a ticket more quickly:

Ever heard of a fifth freedom flight? Airlines generally aren’t allowed to operate flights between two countries that aren’t their own, but there are exceptions to this.

Compare this with the 61,100 miles United Airlines charges for its premium economy flights from New York to Frankfurt and you’re saving more than 14,000 miles.

Add a stopover (or two)

Singapore Airlines is generous with its stopover policy on reward flights. You’ll receive a free stopover on a round-trip Saver-level flight, or one stopover in either direction on Advantage-level award (which are much more expensive).

However, it’s still possible to add in a stopover if you’re flying one way on a Saver award. Singapore’s policy allows you to add as many stopovers as you’d like at the cost of $100 per stopover.

Singapore defines stopovers are breaks of more than 24 hours between flights, and the airline allows stopovers on Singapore-operated flights only.

There are some additional restrictions: You aren’t allowed to backtrack, and these flights cannot be booked online. You’ll need to call to have them pieced together.

Theoretically, this means that you can book a flight from Houston to Sydney in premium economy with a Saver award. You can build in a stopover in Manchester for $100, stop for a week, then head onward to Singapore. For another $100 you can stop in Singapore for a week, then continue to your final destination of Sydney.

That’s a pretty cheap way to see several destinations at once.

Singapore Airlines premium economy service is a comfortable way to get around the world. Although the planes offering this cabin are limited, there are still six departure airports in the U.S. from which you can book a premium economy ticket.

If booking an award flight, take advantage of generous stopover rules and a fifth freedom route to maximize your miles on a Singapore Airlines premium economy ticket.