Global Entry vs. Nexus: Which Is Better? 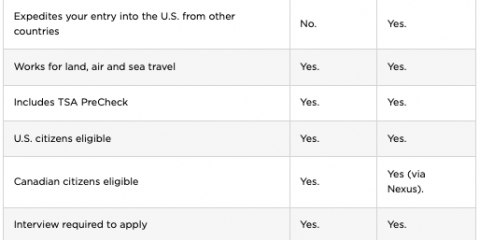 After a red-eye flight or a long car ride, it’s not ideal to be stuck in a long line at customs or the border. A trusted traveler program like Global Entry or Nexus can get you where you’re going faster.

Are Global Entry and Nexus the same? No — but they are similar. When comparing Nexus with Global Entry, you’ll find that Nexus is likely better for frequent travelers to Canada. At the same time, Global Entry benefits Americans who regularly travel to countries other than Canada. Here’s a look at Global Entry versus Nexus.

Global Entry vs. Nexus at a glance

This chart shows the difference between Nexus and Global Entry.

Everything you need to know about Global Entry

Typically, anytime you return to the United States from another country, you have to go through a process with U.S. Customs and Border Patrol that includes passport checks and potentially an interview with a live agent — sometimes after standing in line for half an hour or more.

Global Entry, a program run by CBP, allows pre-approved passengers who are deemed a low risk to skip this process when they return to the U.S. by instead using an automated kiosk at more than 75 airports. At these entry kiosks, you’ll swipe your passport, scan your fingerprints and fill out a customs declaration form — then you’re done.

CBP also has Global Entry kiosks at more than a dozen international airports, allowing members returning to the U.S. to go through the required customs and immigration processes before getting on their U.S.-bound planes. Then, when they land in the U.S., they’re treated as domestic travelers, bypassing the customs and immigration hassles.

Citizens from the United States and 11 other countries and Mexican nationals are eligible for Global Entry membership. To become a Global Entry member, you must fill out an application, pass an extensive background check and get interviewed in person by a CBP officer. The fee is $100 and the membership must be renewed every five years.

Some Global Entry-eligible U.S. airports include:

If you’re heading to the U.S., you may be able to use a Global Entry kiosk before you even board your flight. CBP operates these kiosks at select airports, including:

See this link for a complete list of airports with Global Entry kiosks.

How to apply for Global Entry

Ensure you’re eligible by checking CBP’s criteria before paying the nonrefundable $100 application fee. Some reasons you might not qualify:

CBP officials will then review your application; assuming you clear that hurdle, you’ll be notified to schedule an in-person interview at a Global Entry Enrollment Center. Find the center nearest to you at this link.

Nerdy tip: Suppose you’re flying into the U.S. from abroad after your application is approved, but your interview has not been completed. In that case, you can finalize this last step at an Enrollment on Arrival location at certain airports. The CBP recommends using an Enrollment on Arrival location for anyone traveling into the U.S. in the next six months.

Be prepared to supply other information or documents that could include:

What happens after you apply for Global Entry?

Once you fill out your application, it can take 90 days or more to get final approval. You’ll be issued a Global Entry Card with your nine-digit CBP PASSID number if you’re approved. You can also find this number anytime by logging in to your Trusted Traveler account.

You’ll enter this number in the Known Traveler number field when you book plane tickets. For example, here is American Airlines’ booking page showing the field where you enter your PASSID number.

Depending on where you’re traveling from, your boarding pass should include the TSA PreCheck logo that gets you through the expedited security screening at the airport. You can’t just show your Global Entry Card at airport security to access the TSA PreCheck lane — if the logo doesn’t print on your boarding pass, you’ll have to go through the regular TSA screening lane.

Everything you need to know about Nexus

Your Nexus membership can help you bypass hassles at the border, whether traveling by plane, car, boat or even on foot.

Nexus by air, land and sea

Members can use Nexus kiosks to enjoy expedited Entry into Canada when arriving at any of nine airports:

When flying to the United States through a Canadian preclearance airport, Nexus members enjoy the same expedited entry privileges as U.S.-based Global Entry members returning from any airport with a Global Entry kiosk.

When traveling by car, Nexus members can use one of the designated Nexus lanes at any of 21 U.S.-Canada border crossings, which are listed here (make sure to note the applicable hours and any closures). No matter which direction you’re traveling, you’ll present your Nexus card for electronic scanning and then proceed to visual inspection.

Check this CBP website to find out which number to call. For more information on Nexus for sea travel, visit the Nexus Marine website. Like driving across the border, all individuals on board must be Nexus members to use this service.

How to apply for Nexus

Canadian citizens and residents can apply through the Canada Border Services Agency website. It’s similar to the process U.S. citizens undergo, including the online application and the required in-person interview.

What happens after you apply for Nexus?

It can take six months or more for U.S. and Canadian authorities to approve your Nexus application.

If you’re approved, you’ll get a Nexus card that you must activate online. Then, when booking a flight, you’ll enter your nine-digit PASSID displayed on your card, which should automatically qualify you to receive the TSA PreCheck logo on your boarding pass when traveling from U.S. airports offering TSA PreCheck.

Which is better: Global Entry or Nexus?